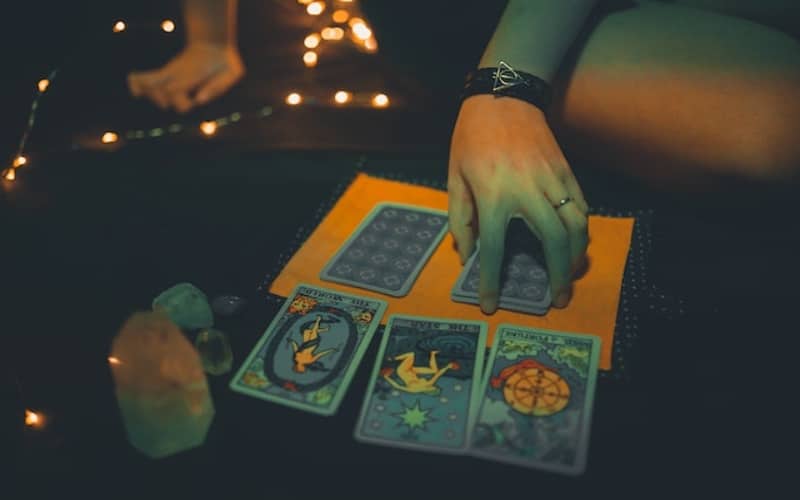 When was the last time you had a “gut feeling” about something? For example, maybe you had an instinct about a situation even though you couldn’t explain it. The second card of the Major Arcana, the High Priestess, governs the gut feeling and all that we know without knowing why.

Even though unexplained perceptions are frequently invalidated, they’re acknowledged in most societies. Because the High Priestess represents unconscious understanding, she’s depicted in the tarot as a combination of several mystical women throughout history. These women are cast as the guardians of secret knowledge that’s both revered and feared by the dominant culture.

The mythical Greek queen of the underworld Persephone, the Egyptian goddess Isis, and a Pope from the Middle Ages who was secretly a woman—all of these figures who represent the hidden side of feminine energy exist in the High Priestess. When she appears for you, she reminds you to honor the truth that’s beyond the intellect and trust your intuition.

Not every reader believes that a tarot card appearing upside down changes its meaning. However, a reversal can indicate a blockage, opposition, or other shift to the upright meaning.

The High Priestess in reverse implies the following:

Because this tarot card is essentially passive, I’ve also seen it appear in reverse to show that a person is emerging from a period of deep contemplation. In this interpretation, the card actually suggests purposeful action. Although this seems counterintuitive with some of the other reversal keywords, I think of it this way: you dignify the receptive energy of water by taking action when it’s appropriate.

In summary, the High Priestess has a complex set of meanings. The sections below include more context about the card for your tarot readings, as well as suggestions for how to interpret it in combination with other cards.

The table below includes key correspondences for the High Priestess. Knowing about related numbers, elements, and astrological associations can add depth to your readings.

In Pamela Colman Smith’s illustration, the High Priestess resembles a priestess of the Egyptian goddess Isis. This is likely because an influential European court in the 18th century believed that the tarot originated in Egypt and changed the design of this card accordingly.

However, this archetype has also gathered various cultural associations throughout history. Study the card in your deck to observe what stands out to you. Then, refer to the generally accepted interpretations of the symbols below:

Meaning of the High Priestess

In many ways, the High Priestess is designed to be unknowable. Because of this, the card is famously difficult to interpret. Your relationship with the unconscious mind is unique. Therefore, the meaning of the High Priestess in your life will differ from the card’s meaning for the person you’re reading.

Sometimes, your connection to the myths related to High Priestess imagery can help you and your querents understand her better. I’ve mentioned Isis several times, for instance. An ancient Egyptian goddess associated with nature, Isis uses her magic to resurrect her husband Osiris. The Greek goddess Persephone similarly has associations with the cycle of life: she governs the dead but also returns to the world above to bring new growth in the spring.

Compare the High Priestess to the third card of the Major Arcana, the Empress. These cards are the first representations of divine feminine energy in the Major Arcana cycle. However, many people note that these two figures, much like goddess pairings in several cultures, divide femininity between disparaged and celebrated expressions of womanhood in society.

In Judaic myth, for example, Lilith and Eve could be counterpoints to the High Priestess and Empress. Lilith, like the High Priestess, is associated with sexual desire and death. Although Eve is tempted from Eden as well, she’s the accepted matriarch of Judeo-Christian lineage.

You might relate to Isis, Persephone, or Lilith. You might also find kinship with the original namesake for this card, the “Papess” or “female Pope.” Some believe that she referred to a woman named Pope Joan who gained religious power only while disguised as a man. Whatever your network of connections to the card, the High Priestess blesses your belief in hidden truths and the mysterious ways that life unfolds.

In the most literal sense, the High Priestess could represent an attractive, sensual person. She’s probably something of an enigma, possibly misunderstood but highly magnetic. If the card represents you or a querent, you might be called to learn how to use your intuitive or mystical gifts. You might also want to determine how to protect yourself from anything that saps your energy, including other people’s perceptions of you.

If the card represents someone else, that person could be an important psychic teacher. They could also be an incredibly intuitive person who is able to receive information and provide advice, much like a Greek oracle. Alternatively, you might be romanticizing someone, and your relationship would benefit if you saw this person clearly.

More often than not, however, the High Priestess represents something more abstract about you or your situation. This card brings passive and receptive energy, so a period of withdrawal from other influences might be beneficial. Although it might look from the outside like you’re retreating, you’re really just tapping into your intuition.

Even if you can’t articulate why, you should honor the messages you receive during this time. Your dreams might be especially memorable. You could also have a feeling around someone or something that you just can’t ignore. And if you can’t, don’t! Let those impressions mingle within you until you find a clear path forward. But there’s no rush, and you might not understand right away what was guiding you.

Honor your inner wisdom regardless. What appears to be illusory is often not separate from reality.

Because the High Priestess reminds us that opposition is an illusion, this card doesn’t need to have a distinctly different meaning in reverse. But if you do read reversals, you might want to consider how the reversed orientation can affect meaning.

The association with withdrawal from the world is still present, but this time it has a more negative influence. In other words, you might be afraid or confused and therefore unable to make a decision. There’s also an implication that you might be keeping something secret or living two lives that can’t be integrated.

You can see how withdrawal, unease, and confidentiality might sometimes serve you and other people but hurt the greater good at other times. If the High Priestess appears in reverse, you might ask yourself what you aren’t bringing to light and why. Are you failing to consider others? Are you also doing harm to yourself?

Finally, our “gut feelings” sometimes become untrustworthy due to upsetting or traumatic past experiences. If you suffered a dog bite when you were a child, for instance, you might feel a bodily alarm bell as an adult when you see any dog. In some cases, the reversed High Priestess appears when a trauma response is influencing the situation. Of course, when this happens, withdrawal is often still the best immediate response; you should soothe your nervous system before you take further action.

The scenarios below are a few commonly requested types of readings.

In a one-card reading for a question with a “yes” or “no” answer, the High Priestess is a “maybe.” Another way to translate this card might be “yes but not yet.” Some readers do think of her as a “yes” if the querent’s desires and plans are for the greater good.

When the High Priestess appears in a love reading, your intuition about the relationship is key.  It’s normal to want to impress a crush or please someone we love, but try to be honest with yourself and with your lover. For instance, avoid presenting an overly rosy version of yourself or putting someone else on a pedestal.

If you feel any subtle emotional shifts or bodily reactions, don’t question them too much. Trust your intuition about a person or a situation.

Taking on more work or leadership roles isn’t recommended at this time. Instead, you might want to dedicate yourself to learning more about something that matters to you. You also might not have access to all the information you need to make the decision that’s best for you—it’s even possible that people have hidden agendas.

If you are making a decision right now, trusting your intuition is again advised. Recently, I left a job that was appealing on the surface. However, despite how often I tried to reason with myself about it, it didn’t feel right to stay. During this time, the High Priestess appeared repeatedly in my tarot readings.

After I quit, I almost immediately met someone who connected me with a more fulfilling work opportunity. Meanwhile, the company restructured, and several of my former coworkers lost their jobs.

In short, believe your inner guide.

Key Pairings with the High Priestess

Certain cards can provide more context when they appear with the High Priestess in a reading.

The table below shows possible meanings of the High Priestess when paired with Major Arcana cards.

The table below shows possible meanings of the High Priestess when paired with Minor Arcana cards.

The questions below are commonly asked about the second card of the Major Arcana.

What does the High Priestess mean in the Major Arcana?

The High Priestess represents intuition, inner wisdom, and psychic perception. This card might also indicate a period of withdrawal from society.

Which goddess does the High Priestess represent?

This card has several divine associations, but the High Priestess is most often associated with Isis and Persephone. In fact, the crown and outfit of the High Priestess are designed to resemble the clothes of the ancient Egyptian priestesses of Isis.

What does the High Priestess mean in astrology?

This tarot card is connected to the cycles of the moon. The zodiac sign Cancer is also ruled by the moon, so Cancer corresponds to the energy of the High Priestess.

What does the High Priestess tarot card mean for a relationship?

The High Priestess is a sign to trust your intuition and be honest in love. If something feels off, the relationship might not be aligned with your needs or best interests. You also might need to take off your “rose-colored glasses” and see the relationship clearly for what it is.

Which element is associated with the High Priestess?

The High Priestess is associated with the receptive nature of the water element.

The Magician: the Tarot’s Great Creator