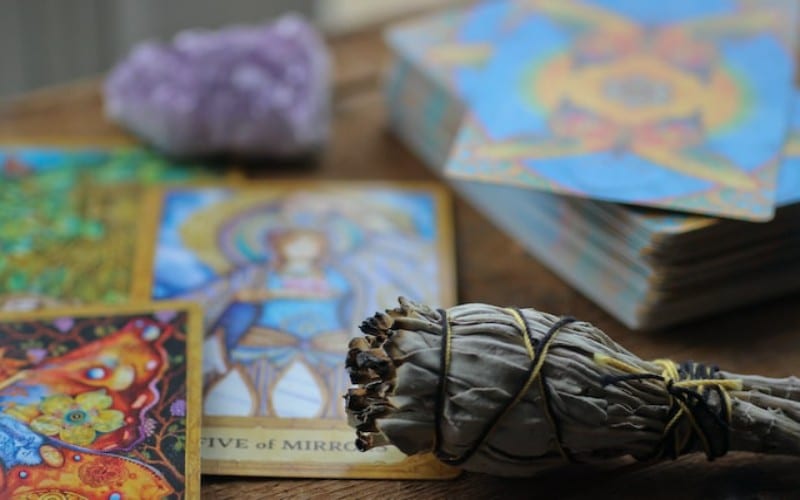 The first card in the Major Arcana, the Magician usually depicts a figure in a commanding stance at an altar. This image is a symbol of transformative power, often through mystical or mysterious means.

A magician holds immense potential to benefit the greater good. For instance, some indigenous communities embrace the mystical role of the shaman as a healer. The mysterious energy of this card is also tied to the role of the artist. I associate the Magician with the singer-songwriters who challenge cultural norms. I can clearly envision Björk or David Bowie as the magical figure on the Rider-Waite card.

This past week, my friend group passed around a meme that says, “My love language is reminding you of your power.” This is also the Magician’s love language! Whether you’re an artist or healer or not, this card reminds us of our creative power and the ability to make meaning of our world.

When the Magician is upright, the following keywords are likely to apply:

If you read reversals, this card when upside down shows a blockage or shift of the upright meaning. The reversed Magician could have the following indications:

In situations where someone is behaving manipulatively, that person could be the querent or someone taking advantage of the querent. If you’ve pulled more than one card, you can use surrounding cards to determine the querent’s role and influence. You can also use other cards to understand what’s causing the blocked energy.

In addition to more context for the Magician as a solo card, you can find information about its meaning when paired with other cards below.

Each tarot card also has correspondences with numbers, elements, zodiac signs, and so on. The table below outlines the key associations with the Magician.

The figure on this tarot card is usually portrayed as a wizard. In early decks, this wizard appeared as a stage magician or juggler. In the Rider-Waite-Smith deck commonly used for divination, the card shows a powerful individual adorned and surrounded by many symbols.

The card imagery is likely to help you develop a deeper understanding of the card. Spend some time studying the physical card. Take note of what stands out to you before you refer to the symbolism below:

Meaning of the Magician

Unlike the zero card the Fool, which conveys pure potential, the Magician represents the first steps toward initiating change. This person has chosen to make their vision a reality. Like an infant discovering the depths of consciousness, the Magician initiates an exploratory phase of the Major Arcana.

In addition, different cultural attitudes toward mystical power are imbued in the card’s meaning. For instance, occult practices are often marginalized, and spiritual access is frequently confined to institutions like the church. Throughout history, people who appear to follow other principles have been feared, serving as scapegoats for larger social woes.

These associations mean that a person who receives the card might experience life as an outsider—not necessarily unhappily. Depending on how they express their gifts and how those gifts are perceived culturally, they might meet greater or fewer obstacles. Therefore, your culture’s attitudes toward the querent’s power will inform your interpretation.

Whether upright or in reverse, the card is a wonderful omen for personal development and social progress. The Magician is one card that seems to convey the same thing in any orientation. The querent’s power and the consequences of wielding it for change. Surrounding cards reveal the distribution of power and why obstacles exist.

However, the card’s orientation can help you piece the narrative together more efficiently.

The upright Magician is a strong blessing for your chosen path. In other words, your actions have the power to create change. When upright, this card is also an indication that you’re adept at moving within existing systems to influence the world. Think: a software developer who uses existing technology to create an app for more accessible health care.

Although you have everything you need to succeed, the card doesn’t guarantee success. It’s likely to appear upright for you if you have determination, clear intentions, and honed skills. If you can ensure that these elements are sustained through your actions, then success is very likely. Large-scale influence is also possible from the results of these actions. Though the Magician isn’t explicitly about striving for fame or public recognition.

You’re likelier than others to receive the Magician if you work as an artist or healer. Another possibility is if a job or project is currently engaging your creative energy.

The reversed Magician conveys one of two major meanings: destructive energy or lack of action.

If the first category of destruction applies, this card prompts you to ask whether you’re using your power to build something that serves yourself and others. Are your intentions and motivations clear to you? Similarly, might your plan have an adverse outcome that you’re not considering? The reversal doesn’t necessarily mean you cease action; instead, you should assess your plan for quality and purpose.

You also might need destructive energy to overcome an obstacle to your constructive efforts. For example, say you’re developing a renewable energy startup and face reluctant investors. As a result, you need to use your power to deconstruct existing barriers. These can be public misconceptions and difficulty competing with more established energy sources. The spirit of the reversed Magician can also be helpful when a situation involves social injustice.

When this card indicates inaction, you can consider what your obstacles are. Use that to determine which actions you can take to remove them. In some cases, the reversed Magician could appear when someone is abusing their power and manipulating you. For instance, cult-like leaders occupy the space of the Magician in reverse.

Finally, do you ever get jittery when your nervous energy is pent up? Twitchy limbs and grinding teeth embody this reversed card. If you’ve been stuck in a situation for a long while, this reversal might indicate frustration, depression, or anxiety. Mental states that prevent you from moving forward until you find a way to channel the energy.

The most common questions for the tarot involve love and work. I don’t personally read for questions that can be answered with “yes” or “no,” but many practitioners do. Refer to the scenarios below for more information about the Magician’s meaning in various contexts.

If you perform a one-card pull for a yes-no question, the Magician usually implies “yes.” This is generally true whether the card is upright or reversed. In both cases, it will be important to understand how to direct your energy to achieve your goals.

In love readings, the Magician is a card of manifestation through intentional action. At this time, you can create opportunities for love. When the card represents your love interest, that relationship has strong potential to bring out and amplify your strongest qualities.

Whether you’re looking for a new relationship or want to rekindle a longer relationship, this card encourages experimentation and play. Just be sure that everyone’s on the same page.

The Magician is all about creating opportunities and then pursuing them with verve! If you’re looking for work, fear not. Your focused efforts will find you the right opportunity. If you have existing work that’s starting to bore you, here’s a sign to propose more creative opportunities. The keys here: trust that you have what it takes, and be proactive.

In summary, this card suggests that your job supports your creative expression. It’s a good indication that longevity is possible as long as you continue to find ways to channel your resourcefulness and talent into your work.

Key Pairings with the Magician

There are already many layers to the Magician on its own. However, other cards can help you discern more about the power involved. What amplifies it? What blocks it? Is it constructive or destructive, and why?

The table below shows possible meanings of the Magician when paired with Major Arcana cards.

The table below shows possible meanings of the Magician when paired with Minor Arcana cards.

The questions below address common questions about the first card of the Major Arcana.

What type of person is the Magician in the tarot?

This person is an inspired creator! You’ll know the Magician because their artistry and work ethic is undeniable. They might also be creating something unlike anything that already exists in the world.

Which planet and zodiac sign are associated with the Magician?

This card is ruled by Mercury, a planet of communication. Both the air sign Gemini and the earth sign Virgo are associated with Mercury.

What does the Magician tarot card mean in a love reading?

If you’re seeking love, you should actively create opportunities to find the connection. If you have a love interest, that relationship is likely to support your personal development. In general, you have the emotional tools to build a meaningful loving partnership.

Which elements does the Magician represent?

The Magician represents aspects of both passive earth and active air. Tarot practitioners debate which element is more applicable, but both seem equally appropriate for this card.

Does the Magician mean yes or no?

In most cases, this card means yes. However, if you don’t apply your skills and learn to trust yourself, you aren’t guaranteed to succeed.

The Courageous Fool – Highest Potential of the Tarot

The High Priestess: Mystic of the Major Arcana