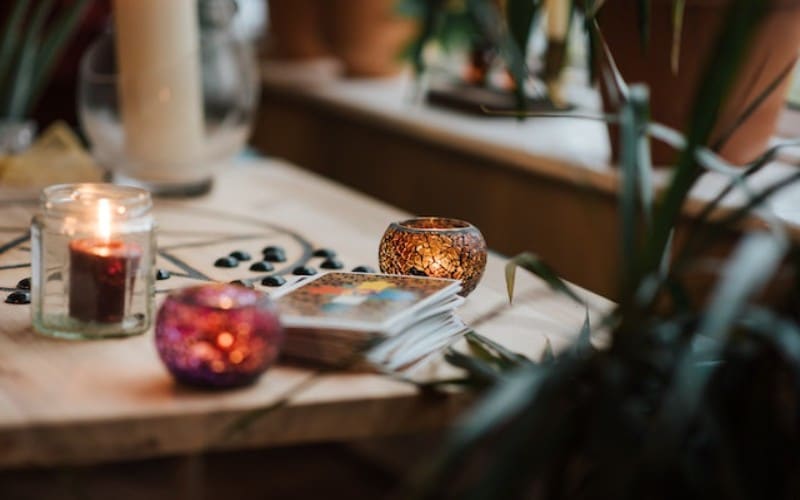 It might seem counterintuitive to claim that a foolish person is full of possibility. Wouldn’t someone naive be likely to fail? And yet, the archetype of the “wise fool” exists in many cultures through time. This figure also occupies a powerful place in the tarot’s Major Arcana.

As the story goes, the ancient Greek philosopher Socrates famously declared that he knew nothing. In Shakespeare’s plays, characters who have low social standing (such as the court jester in King Lear) frequently have the ability to speak the uncensored truth to the elites. In many myths, the fool also appears as a trickster character revered as a god or creator.

A comedian occupies the space of a fool in contemporary culture — using self-deprecating humor to create a persona that critiques society openly without consequence. In the same way the fool tricks and exposes the hypocrisies of conventional wisdom, often without seeming to try very hard.

As a tarot card, the Fool signals a beginning with incredible potential. When this card appears in your readings, a brave and optimistic demeanor can serve you as you plunge into the new.

The following keywords are applicable to the upright Fool:

Not every tarot reader interprets upright cards as distinct from reversals. Some readers instead rely on the interactions between the Major and Minor Arcana to reveal meaning, regardless of each card’s orientation. However, many traditions teach that a reversal indicates a blockage of the card’s energy, which can manifest in multiple ways.

In reverse, the Fool might instead mean the following:

You might notice that several of the reversal meanings seem to contradict one another. In one-card pulls, you can discuss the various meanings with the querent. This will aid in determining the one most relevant to their situation. For one-card readings that answer yes-no questions, many tarot readers believe the Fool means “yes.” In reverse, the Fool might mean a “yes, but.”

Pulling multiple cards provides more context for interpretation. Whether you’re a beginner practicing three-card readings or an experienced reader drawing ten cards for a Celtic Cross, you can learn more about the meaning of the Fool below.

Each tarot card also contains various symbolic correspondences, such as zodiac signs, planets, numbers, and elements. The table below outlines the key associations with the Fool.

The figure on this tarot card is historically portrayed as a beggar or wanderer. The Fool in the Rider-Waite-Smith deck depicts dense imagery, and each element conveys symbolic meaning.

Consider the imagery in Pamela Colman Smith’s illustration of the Fool that helps us understand its deeper meaning:

Meaning of the Fool

I was always taught that this zero card belongs anywhere in the tarot. We can call upon this energy to help us solve problems and move forward in a variety of situations. This means accepting what can’t be changed, resolving conflicts, and building a new life. Because the Fool initiates action, she also fits perfectly at the beginning of the tarot.

Is this person ignorant of society, or is she simply choosing to move through the world unassumingly? A little of both is possible with this card. Whatever the underlying motivation, the wise Fool is powerful precisely because she ignores respected social mores and standards.

The Swiss psychiatrist Carl Jung, who made use of archetypes such as the fool in his philosophy, said that the “right way to wholeness is made up of fateful detours and wrong turns.” Who is more likely to take a wrong turn than a fool? Who does so with abandon and optimism, not considering failure as an option? The person who embraces the energy of the Fool has the power both to change the self and to change the world.

In the journey of the Major Arcana, you can think of yourself as the Fool moving through the great themes of life. This journey culminates in the World, the final card of the Major Arcana. I think of a quote from Four Quartets by T.S. Eliot: “…the end of all our exploring / Will be to arrive where we started / And know the place for the first time.” After we find wholeness, we are again the Fool as we begin our next adventure. In fact, we’ve been the Fool all along.

Like many cards in the tarot, the Fool suggests a choice. Unlike the Lovers or Justice, however, this card is less likely to indicate a moral or ethical quandary. Instead, the Fool asks us to act according to our instincts and callings.

When I use the keyword “innocence” to describe this person, I don’t necessarily mean naivete or ignorance. I think of someone who moves forward as though they’ve never experienced loss (even if they might have lost a great deal). There’s a lyric by the pop singer Robyn that encapsulates this energy well: “I’m gonna love you as I’ve never been hurt before. I’m gonna love you like I’m indestructible.” The singer is aware that hurt and destruction are possible, but she moves forward with a clear conscience.

For the querent who receives the Fool, the mindset will be a critical component for their success. They must embody as much as possible the optimism and humor of this card and trust themselves to react appropriately to obstacles despite not knowing what they’ll be yet. This mindset is especially important because often the Fool also indicates a journey that’s at odds with what’s socially expected or encouraged.

When this card appears, I also tend to feel that the querent’s spiritual guides and protectors are on their side. There’s a real sense of blessing for the querent’s next venture as one that will support their spiritual growth. Reminding the querent of this can help them feel protected, especially if others in their life don’t understand their actions.

This card in reverse doesn’t mean that the querent lacks spiritual protection or shouldn’t do what’s calling them. A reversal does, however, indicate that something about the Fool’s energy isn’t expressed adequately at the moment. I tend to interpret this reversal as shifting the energy in one of two general ways: moving the querent toward inaction or hyperaction.

Understandably, you might resist something that scares you or that you don’t fully understand. This could be the case if the Fool appears reversed in your reading. Like a comedian who won’t update his jokes, you’re resisting change or letting your fears take the steering wheel in your mind. Your fear is creating a disconnect between your inner self and outward expression because you aren’t acting despite knowing what’s right.

Alternatively, you might be acting recklessly or reactively. You know something needs to change, but you haven’t taken the time to connect with your intuition or spiritual guides. When this interpretation is most relevant, it doesn’t necessarily mean you shouldn’t act. You just might need to consider when to act and how to ensure that you have faith in yourself.

As Rachel Pollack reminds us in Seventy-Eight Degrees of Wisdom, both reversal interpretations are the result of a disconnect with the guidance of the wise inner self.

The Fool might bring specific messages depending on the focus of the reading. For example, many querents wonder about their prospects in love and work. What does this card suggest for those topics?

In a love reading, there’s a strong indication of a new relationship that you can approach without past baggage. Engaging this person can inspire you and serve your personal development. You’re encouraged to pursue the relationship and see what comes of it.

However, look to the other cards to learn more about the context. For instance, the Fool with the Eight of Cups could actually urge you to be courageous as you leave a long-term relationship. In this circumstance, the Fool protects you on your journey to reconnect with yourself.

The phrase “beginner’s mindset” refers to an increasingly popular concept in professional settings that has its origins in Zen Buddhism. According to Shunryu Suzuki, “In the beginner’s mind, there are many possibilities, in the expert’s mind there are few.” If you approach problems as a beginner, even if you are indeed a pro, you’re more inclined to ask questions and propose unique solutions.

In reading about work, career, or creativity, consider how this mindset can help you move past an obstacle. I call upon the Fool often as a dancer learning new movements, especially when those movements are difficult for me. If I don’t expect to be an expert right away, I can play until I discover how a movement works in my body. When I choreograph, the energy of the Fool also helps me create unexpected and delightful sequences.

Key Pairings with the Fool

You’re often pulling more than one card when you complete a tarot reading. As always, follow your own intuition when interpreting card interactions. However, give special attention to the implications of the pairings below.

The table below shows possible meanings of the Fool when paired with Major Arcana cards.

The table below shows possible meanings of the Fool when paired with Minor Arcana cards.

As you encounter more readings that contain the Fool, you might find that you frequently refer to certain key facts about the card. The questions below address common questions about the zero card of Major Arcana.

What does the Fool mean in a love reading?

In a love reading, this card is often the harbinger of a new relationship. This connection might feel like young love, especially open and full of possibility.

Which element is associated with the Fool?

This card contains the energy of the element air, which governs communication and intellect.

Why do I keep getting the Fool tarot card?

When you receive the Fool repeatedly, you’re being called to muster the mindset of the card—brave, hopeful, and open—as you approach an exciting endeavor that’s likely unfamiliar to you. When this card very persistently appears, you might want to consider which actions could more effectively advance a project or situation, even if those actions feel risky.

The Fool is ruled by Uranus, a planet associated with freedom, individuality, and the power to inspire change in society.

Suit of Cups: A Journey of Emotion

The Magician: the Tarot’s Great Creator