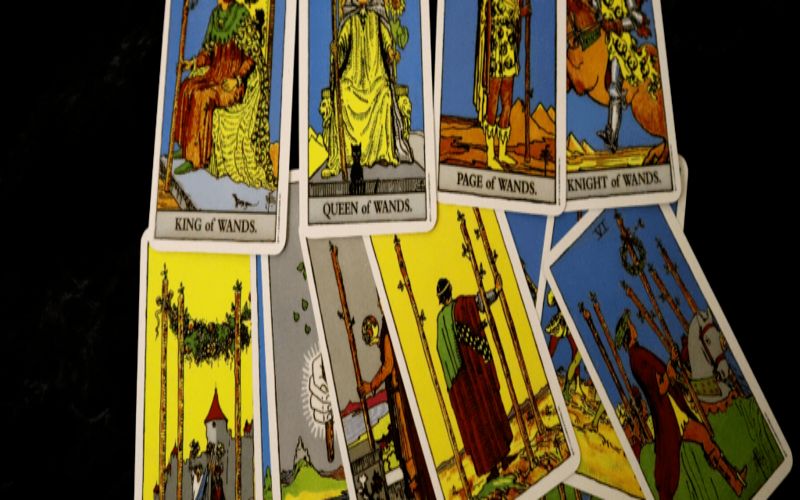 In the Minor Arcana of the tarot, the Wands contain associations with the vitality of life. The 14 cards in the suit represent the different stages and aspects of creation. Not an artist? Not to worry—every human’s creative drive shows up somewhere in their lives, so this suit applies to everyone.

Every culture has developed a unique understanding of creativity. The ancient Greeks believed inspiration came from goddesses known as the Muses. In the later 1700s, European literary theorists popularized the term “genius.” This word dropped the belief in literal goddesses but kept the idea of the artist as channeling the divine.

In most contemporary cultures, inspiration is mostly an internal process. Some people even resist its definition as a feeling and are more inclined to replace “inspiration” with concepts of motivation and achievement that can be cultivated with effort.

The Indo-Aryan word “jugaad” is one way of capturing the contemporary creative spirit. Rather than referring to spiritual intervention, “jugaad” implies determined and artful problem-solving when resources are scarce.

In the Minor Arcana the Pentacles are associated with Prosperity, the Cups with Emotions, and the Swords with Purpose– The suit of Wands tarot cards guide you toward following your inspiration and creating the life you want.

Some tarot readers define this suit as one primarily of willpower. After all, a magic wand is only as powerful as the magician who wields it. However, I’ve chosen to use the word “inspiration” because it retains a facet of spirituality. Although determination and resilience are absolutely keys to this suit’s expression, an individual’s relationship to the spirit can affect how these cards appear.

When you read and reflect on the cards, you develop your intuition by building personal associations with the images. Reading a beginners guide about tarot can provide helpful context, but only you can bring your unique vision to a tarot reading. Although you probably don’t use literal wands in your everyday life, I encourage you to consider your personal associations with wand-shaped objects.

For example, one of my favorite tarot decks refers to this suit as the Branches rather than Wands. The tree imagery recalls the association with vitality, creation, and life itself. Walking sticks, flagpoles, and conductor’s batons are also types of wands. How might these objects relate to the symbolism of the suit? I’m even reminded of the TV remote, which we use to change channels. You could think of the Wands as the actions we take to change the channel in our lives.

Traditional correspondences of the Wands

Note that there are alternative associations within the tarot community. Because the history of tarot involves many traditions, philosophies, and personal practices, each practitioner has their own approach. No single set of associations is right or wrong; you should honor what feels appropriate to your intuitive sense.

Brief History of the Suit of Wands

Along with your intuition, an understanding of historical context helps you connect to the collective consciousness. For instance, the earliest versions of tarot were derived from card games. In fact, the 56-card Minor Arcana still resembles the structure of the standard 52-card playing deck today. You could even use playing cards for divination, just as people might have done in ancient societies.

Of the standard French suits on game cards, the clubs most likely align with the Wands. In an earlier Middle Eastern card game, the polo-sticks (symbols of the favorite sport of the ruling class) bear the closest resemblance to the Wands. We can see how the theme of a will might have evolved for the tarot suit originally associated with athleticism and competition.

The tarot first appeared with 78 cards in 15th-century Italy, where wealthy families commissioned the creation of the Major Arcana with Judeo-Christian iconography. Fast-forward to the early 20th century: A.E. Waite used this imagery to develop one of the most well-known tarot decks today. In the Golden Dawn system that influences the Rider-Waite tarot, Wands signify the working classes. Although this literal class association doesn’t inform my interpretations, it again provides context for the hard work and action that this suit represents.

Positive expressions of this energy result in quick, inspired action. The fiery Wands motivate us and help us make things happen. When we’re channeling this spirit, we have the drive and resilience to complete our projects successfully. The cards often indicate personal growth, creative flow, and work success.

When people have Wands-related personality traits, their strengths include passion, courage, and friendliness. These people aren’t afraid to take risks and make bold decisions. They’re natural leaders who are often admired and respected by many.

Consider all the qualities of the element of fire. If it can provide warmth and light, it can also be incredibly destructive when unchecked. Recklessness, anger, and selfishness are all associated with this suit. Many of these qualities can have very negative consequences for relationships.

Sometimes, these destructive attributes can serve a person. There might be situations where you need to call on your fire to lead you away from a difficult situation or build a better future. As a metaphor, consider how a controlled fire destroys forest matter to help prevent larger wildfires. In these cases, others might perceive Wands’ energy as frightening or disruptive even though it’s lifting up the greater good.

That said, undignified fire energy can lead to ego-driven leadership that’s out of touch with the collective. Such a leader might be opinionated, hot-tempered, or spiritually bereft. Being too quick to act without appropriate reflection can undermine best efforts.

Meaning of Wands in a Reading

When Wands are the most dominant suit, your circumstances likely involve your work, creative projects, and action that you’re taking to grow. Wands might appear when the querent’s focus is any of the following:

Look to the other cards in a spread to learn more about the consequences and possible outcomes of your actions. Your work life might impact your relationships, the success of a creative project could depend on how you handle resources, and so on.

Who hasn’t been inspired by the spark of new relationship energy? Several cards in this suit suggest different relationship stages, but overall the Wands bring insight into a newer or developing connection. The partnership could be incredibly passionate, and it might have begun at work or in creative collaboration. Both individuals support the other’s drive and spirit.

On the flip side, the appearance of this suit might indicate anger issues, passionate disagreement, or exhaustion—like the embers of a fire slowly fading unless they’re stoked. Does the partnership need more fuel or more boundaries? The specific card provides clues about how to tend to the fire of the relationship.

This suit has a direct correspondence with work and career. The cards represent opportunities, potential business partnerships, and ways of expanding your perspective. The Wands help you act purposefully by showing how your choices are connected to your feelings, values, and sense of security. In work, this understanding could translate into intentional risk-taking or building supportive alliances.

If you are new to tarot a good idea would be to start with simple three card spreads before you move on to advanced spreads with more cards.

Journey of the Wands

The ten numbered Wands cards tell a tale about working hard for a creative pursuit. You can arrange these cards in numerical order to get a sense of how a creative effort might unfold. What do you notice about each landscape or the expression on each figure’s face? How are the staves being used (or not) in the illustration?

These keywords can add context to your story. Although there are infinite possible stories, I’ve included an example involving a querent who begins a business venture.

The four court cards indicate people whose astrological signs are Aries, Leo, or Sagittarius. If you are one of the fire signs, your significator card might be a court card in the Wands suit. People who aren’t fire signs can still appear as fiery cards if they express passionate or creative traits in their relationship with you.

In your life, who could be represented best by the Wands? Review the descriptions below to learn more about the distinct energy of each court card. The court rank sometimes suggests gender and age, but each card can represent someone of any gender or age who embodies the relevant energy.

This Page is for a young person who explores the world freely, such as a student or traveler. They might represent an exciting or supportive lover or friend. Metaphorically, this card might bring news about a creative project or represent the start of a new stage of life.

Like all of the Knights, this Knight brings about change. He’s adventurous and eager to act. If the elements of the reading are balanced, this card points to the potential to achieve great things. If imbalanced, this person could be insecure or confused from consistently misapplying his energy.

The Queen is friendly and optimistic, a friend of the good times. They’re open to new experiences and naturally bring positive energy wherever they go. A great lover of life, the Queen might be creating space for poetry readings, lively social events, or little adventures. However, they might be especially susceptible to disappointment if an experience doesn’t meet expectations.

This card represents a strong-willed person who is usually in a position of authority. This person usually has many creative accomplishments, but they might be a bit in tension with their responsibilities. The King’s influence could be very encouraging to others but might also have a tendency toward intolerance.

Questions of the Wands

The gift of the Wands is an insight into how our actions relate to other aspects of our lives. Reflect on the following questions after you receive a Wand-dominant reading:

Suit of Pentacles: A Journey of Prosperity

Suit of Cups: A Journey of Emotion