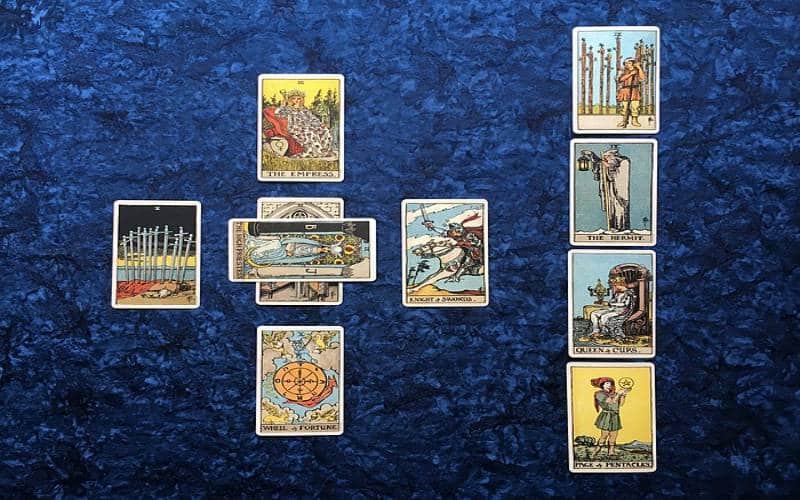 I remember the first time I saw someone lay out the Celtic Cross spread before me, just after my thirteenth birthday. Although I didn’t know how to read the cards, I had a sense that the cryptic cross shape and the vertical line of cards beside it could reveal many mysteries if only I understood the language. Today, the language of the Celtic Cross has become my tried and true tarot spread for almost any situation.

Because the Celtic Cross consists of ten cards, it can seem daunting to newer readers. If you are new to tarot, you should dive into our beginners guide first. However, after breaking down the components and spending some time practicing, you’ll find that the Celtic Cross is more accessible than it seems. And if you’ve been pulling one card or using three-card spreads, you’ll also find that having the context from more cards can add valuable depth to your interpretations.

When to Use the Celtic Cross

The Celtic Cross is the Swiss Army knife of tarot spreads! In other words, it’s useful for most circumstances. Whether your querent has a specific question or not, you can gain important information from this spread.

However, Arthur Waite—who first published documentation of this spread in the early 20th century—advised applying it to a definitive question. If you do want to form a question, I recommend choosing one that can’t be answered by “yes” or “no.”

For instance, a question like “What are my prospects for love in the upcoming months?” is more suited to the Celtic Cross than “Will I fall in love soon?” This is because the complexity created by ten interacting cards doesn’t always result in a clear “yes” or “no.” The querent also always has some control over what happens. Instead of a simple “fate,” you’ll be able to identify several supportive factors and detracting factors for love.

On the other hand, you can rely on the Celtic Cross for general inquiries too. You might have a general focus area, like love or work. You might also be open to any message as you seek clarity. Either way, this spread can offer empowering guidance.

Should you find that the Celtic Cross spread doesn’t feel right, maybe the nine card Work Cycle or the seven card Horseshoe spreads can help. It is great for gaining more insight into a given problem or situation you or the querent is facing.

The layout of the Celtic Cross Spread

Firstly, you arrange six cards in a cross shape. Then, you finish the Celtic Cross by arranging the final four cards from bottom to top in a vertical column. However, the fine details of organization and interpretation depend on the source.

Waite’s version, the first published account, is likely the most influential. But there are others, which I won’t cover in depth here, that have their own unique perspectives. Before Waite, readers likely used this spread for years throughout Ireland, Scotland, and England and their private customs either persisted through oral traditions or disappeared since.

Significance of the Shape

An actual Celtic cross blends pagan symbols related to the ancient Celtic religion with Christian symbols. As a result, the cross represents a historic transition from one faith to another.

Although speculations about the original pagan symbolism vary, a few interpretations are consistent. For example, the cross continues to represent resilience through wisdom, strength, and love. The arms of the cross also indicate the importance of the four classical elements: fire, water, air, and earth. Therefore, these arms correspond to the four suits of the tarot.

In addition, a Celtic cross contains a circle that’s mirrored by the way you place the cards in the Celtic Cross spread. Circles are important shapes in pagan rituals; for instance, pagans used them to create sacred spaces and represent blessings. The circle also persists as a symbol of eternity and cosmic connection.

When you read tarot using the Celtic Cross spread, you can call upon this powerful tradition to empower yourself and your querent through times of uncertainty.

Parts of the Spread

Before diving into the details of each card placement’s meaning, you can learn a lot by first understanding where to find certain information. The parts of the Celtic Cross are like locations on a map:

Although the small cross and the staff are all fairly consistent for tarot readers, the order of the cards in the extended cross (cards 3-6) varies more often. For example, Waite arranged those four cards to mimic the Catholic “sign of the cross.” Eden Gray, another influential tarot writer, places card 3 in a different location than Waite does and proceeds in a different circular pattern.

I’ll outline how I learned this spread, which differs slightly from both Waite’s and Gray’s versions. My arrangement is popular among many contemporary tarot readers, but I welcome you to explore the other possibilities as you practice!

You can refer to the image above for the placement of each card described in the table below.

Beyond simply reading each card individually, you can spin a coherent story by examining how the cards interact within the Celtic Cross. While any card interaction can be significant, there are certain pairs that provide shortcuts to meaningful information.

Compare and contrast the following cards to learn more about the current situation:

Sometimes, the outcome (card 10) doesn’t seem favorable to you. In general, comparing various cards with card 10 helps you understand how you have control over that outcome:

Other general patterns amongst the ten cards can also focus your reading. Consider the following elements within the spread:

The questions below are commonly asked about the Celtic Cross tarot spread.

What does the Celtic Cross tarot spread tell you?

The Celtic Cross provides context for a current situation. This includes the heart of the matter, external and internal influences, and probable outcomes.

What does the second card mean in the Celtic Cross spread?

The second card crosses the first and represents the challenge or obstacle that you face.

How do I choose a significator card for the Celtic Cross?

What does the Celtic cross symbolize in paganism?

The Celtic cross contains symbols for strength, love, and wisdom through times of transition. Its four arms also represent the protective forces of the four elements.

How do you interpret card 7 of the Celtic Cross?

The seventh card of the Celtic Cross represents how you show up in the world. This might include your identity, how people perceive you, and how you influence your situation. Some readers also interpret this card as advice.

Do you need a question for the Celtic Cross spread?

You don’t need a question for the Celtic Cross, though you’re welcome to formulate one if it helps you focus the reading!

The High Priestess: Mystic of the Major Arcana