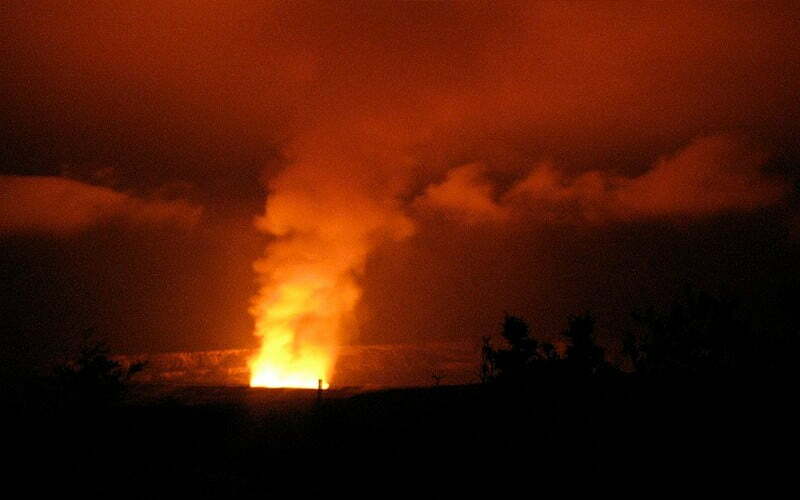 The goddess Pele was supposed to grow up to become a water goddess, but when she discovered matches, her fascination with fire took her in another direction entirely!

​The headstrong young goddess ignored her mother’s instructions and managed to set her home, the island of Tahiti, aflame while playing with fires from the Underworld.

​Pele’s older sister Namaka, a sea goddess, threatened to flood the entire island to punish Pele for being so destructive (according to one version of the myth, it may have been retribution for having had an affair with her sister’s husband).

Fearful for the safety of their children, Pele’s parents loaded them all into a canoe and instructed Pele to rush them to safety on another island.

​Hi`iaka, the youngest child, had yet to be born. She was hatched from an egg that Pele held in her armpit while she paddled furiously with Namaka in hot pursuit. It was a long, stressful journey.

​Eventually, the siblings found a place they could stop, a tiny atoll that was home to only a handful of human tribes. Their arrival created quite a stir since Pele and her sister Hi`iaka were lively young women who enjoyed having a good time, taking frequent breaks from their work to sing, chant, and dance. Hi`iaka, also called Laka, was recognized as the goddess of the hula and patroness of dancers.

​Four snow goddesses lived in the mountains on the island. They were none too pleased with the arrival of these beautiful young upstarts.

​Pele set about trying to make a new home for her family, but it was proving difficult because the jealous snow goddesses kept sending blizzards their way. Hopping from one tiny island to another to escape the hard freezes, Pele kept moving southward only to encounter tidal waves sent by her vengeful sister, Namaka.

​Finally, Pele laid claim to Mauna Loa on the southernmost island. Mauna Loa is the tallest mountain on earth, as measured from the ocean floor, and even the powerful Namaka couldn’t fling her ocean waves that high!

​At last, Pele was able to keep her fires lit, but this only increased Namaka’s rage. Soon the two sisters were waging a ferocious battle.

​Pele’s fires rose up out of the trembling earth, spewing rivers of fiery lava into the ocean, driving the sea away from the coast. As the lava cooled, it added to the land mass, and the small atoll was transformed into the beautiful Big Island of Hawaii.

Though victorious, Pele did not emerge unscathed. She had to take up residence inside her volcanoes, but her exuberant spirit was not to be contained. With the death of her physical body, she became a spirit, a shapeshifter who can assume whatever appearance she wishes.

Often she appears as a shapely young woman, sometimes as a small white dog, and other times as an old woman asking a stranger for a cigarette.

Pele Falls In Love… Over and Over Again

​Legends about Pele and her many lovers and rivals abound. Poliahu, one of the snow goddesses, became her archrival when the two competed for the attention of a young chieftain. As he paddled his canoe, Pele surfed the waves beside his boat to catch his attention. But, after his brief fling with Pele, he had an affair with the snow goddess Poliahu.

​He was so taken with the snow goddess that he moved in with her. Pele was not amused! She managed to win him back from her rival, but the angry snow goddess was not to be outdone. She blasted the couple with fierce ice storms, and the lovers soon had to separate.

​A struggle of immense proportions ensued. Pele erupted from the volcano, forcing Poliahu to flee with fiery lava licking at her heels. The snow goddess quickly recovered her wits, however, and returned with a snowstorm so massive and intense that it forever quenched the spectacular fire on the most northern island.

​Though the two still quarrel, neither will ever win, for they are destined to forever hold each other in a delicate balance. It is their perpetual clashes that have created the luxuriant and fertile hillsides that grace the Hawaiian landscape. Once she has scorched all that lies on her path, Pele swiftly seeds it with the beautiful flowers that quickly rise from the bed that she created with her fiery anger.

​Pele’s jealousy is legendary. Attracted to a handsome mortal named Ohi`a, she flew into a rage when he resisted her seduction while proclaiming his devotion to the lovely mortal Lehua. Furious, Pele killed the lovers.

​Before long, Pele regretted the impetuous act and made amends by joining the lovers together for all eternity, turning Ohi`a into a shrub and filling the branches with soft, delicate flowers made from the body of Lehua.

​The Ohi`a lehua tree, sacred to the goddess Pele, is always the first to sprout and grow in the hard earth of a lava bed.

​Of all her siblings, Pele loved Hi`iaka most. But even she, the one Pele had so carefully nurtured, was not to escape the fury of Pele’s wrath.

​As a young woman, Hi`iaka and her best friend, the poet Hopoe, spent much time together, singing and dancing and tending to the groves of the Ohi`a lehua trees.

Pele thought she could trust this gentle sister and sent her to retrieve a handsome chieftain she had recently seduced. His name was Lohi`au.

​Pele warned her sister that the chieftain was a magnificent male and that she would not tolerate any flirtation between them. Hi`iaka agreed to go, asking only that Pele promise to take care of her beloved gardens while she was away.

​Pele was asking a lot!

​Hi`iaka’s journey proved perilous and lengthy, for she met many demons and monsters along the way. Arriving too late, she found Lohi`au dying. His heart had broken from worry that Pele had forgotten to come for him.

​Using every bit of magic she possessed, Hi`iaka restored the young chief to life. Though they were powerfully attracted to each other, Hi`iaka kept her promise and returned with Pele’s lover, their relationship still chaste.

​Hi`iaka had been gone so long that Pele began to entertain fantasies of her sister lying in Lohi`au’s arms. Furious that Hi`iaka would betray her, Pele burned Hi`iaka’s beloved grove to the ground, accidentally killing her friend Hopoe.

​When Hi`iaka returned and discovered what Pele had done, she retaliated by making love to Lohi`au, right there in Pele’s view, on the lip of the volcano’s crater.

​Enraged, Pele erupted, and the unfortunate young man was burned to death. Hi`iaka, realizing how much she loved him, descended into the Underworld and freed his soul.

​One of their brothers reached out and caught Lohi`au’s spirit as it drifted by his canoe, and the lovers were soon reunited. They returned to one of the other islands, where they lived together in contentment.

​Though she was quick to anger, Pele seldom held grudges. She realized she had been wrong to distrust her sister. And she regretted that she had caused Lohi`au’s death not once but twice.

​Pele was quite sorry for her actions. Still, another lover had already caught her eye, so she was quite content to leave the young lovers in peace while she went about her own affairs.

​Like a volcano’s lava that creates new land, the goddess Pele reminds us that even fiery eruptions and emotional upheavals are followed by new life and change. ​As an archetype, Pele is a passionate and creative force that transforms and rebuilds the landscapes of our lives.

The goddess Pele is often represented by symbols associated with the birth and rebirth of the islands through her volcanic activity. Pele, a goddess that is fiercely protective of her lands, often receives gifts that are symbolic of her legacy.

Naturally, since Pele is the goddess of volcanoes, her main symbol is a volcano. Just like a volcano can be unpredictable, explosive, and dangerous, Pele is also a goddess you don’t want to anger.

Her other symbols are lava, fire/flame, hair, silk, gin, cigar, and crone.

The Hawaiian honeycreeper is a native Hawaiian bird with distinct orange and red feathers. These birds, apart from looking like mini fireballs, are highly revered in Hawaii, and they symbolize power.

These birds are often seen as symbols of Pele, and her other animal symbols are sea turtles, fish, and white dogs.

Ohi’a lehua (a tree that grows on fresh lava flows) is another Pele symbol for obvious reasons. After all, how cool is a plant that can survive such extreme conditions?

Ginger root has an intense and spicy, almost fiery scent. As such, it is a perfect scent for Pele, our spicy and fiery goddess. Other perfumes and scents that are often associated with Pele are plumeria flower, coconut, and Tiare flower.

Obsidian is a gemstone that has an aura of darkness around it, but it also symbolizes power, strength, and protection. This makes it a perfect symbol of Pele, a goddess that has her dark side but also acts protectively of people she cares about.

Other gems that can symbolize Pele are hematite, gypsum, garnet, and peridot.

Red and orange are colors of fire and lava, and they are definitely Pele’s colors. Other colors that can symbolize Pele are yellow, green, and black.

Meditations To Invoke The Goddess Pele

Want To Bring More Pele Qualities Into Your Life?