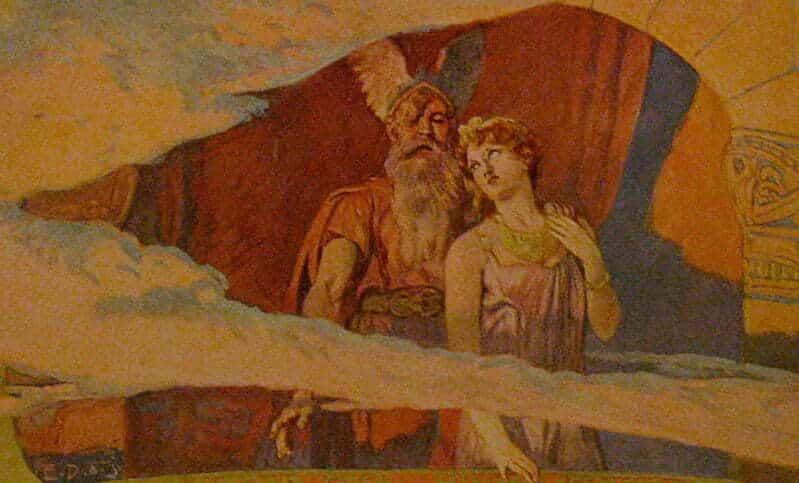 Frigga (also known as Frigg, The Beloved) was the goddess of love, marriage, and destiny. She was the wife of the powerful Norse god Odin, The All-Father.

There is an ongoing discussion whether or not Frigga and Freya are the same goddess or two separate deities. All though there are overlapping similarities supporting this, the jury is still out.

In ancient times, the end of the Winter Solstice, when the hours of sunlight began to lengthen, marked the beginning of the new year and was a time to think of new possibilities that would unfold. ​The Goddess Frigga, who sat at her spindle weaving the destiny of man and gods alike, was the goddess associated with the beginning of each new year.

​New Year’s eve, the longest night of the year, is called “Mother Night” in Northern Europe, for it was in the darkness of that night that the goddess Frigga labored to give birth to Baldur. Baldur was so pleasant and ‘radiant’ that he was beloved by all the gods.

Referred to as the Norse god of light or the god of the midsummer sun, celebrations of his life, death, and resurrection were held at midsummer and usually involved watching the sun set and rise. His myths were immortalized in the ‘Sun God’ Symphony.

​The blessing of Frigga is still invoked for birthing women, with a white candle that last burned during the winter solstice being used as a charm to ensure safe delivery. ​A loving mother, Frigga’s ability to see into the future caused her great pain as she foresaw the death of her beloved Baldur.

The Death of Baldur

​Even though she knew that she could not change his destiny, she simply couldn’t just sit by and watch, so the frantic goddess extracted a promise from all things that they would play no role in his death. Unfortunately, she overlooked one thing, the mistletoe plant, which seemed too insignificant to approach.

​And this was the unraveling of her plan. ​For when the malevolent trickster Loki discovered her oversight, he fashioned a dart made of the poisonous plant and, in a cruel trick, placed it in the hand of Baldur’s brother Hodor (who was the God of Darkness) and offered to guide his hand while teaching him to shoot darts.

​And so he did, guiding the arrow directly into Baldur’s heart. Frigga’s tears of mourning were so bountiful that the hapless plant that had caused his death took pity. From then on, it would bear milky white berries that were formed from her tears.

​In some versions of the myth, the story of Baldur ends happily. He is brought back to life, and the Norse goddess Frigga is so grateful that she reverses the curse she had placed on “the baleful plant,” changing it to a symbol of peace and love and promising a kiss to all who passed under it.

​Frigga’s tender, nurturing side was widely recognized. Her sacred animal was the goose. In Germany, she was worshiped as the goddess Holda or Bertha and was the original Mother Goose. When she shook out her blankets, it began to snow.

​In addition to being a protector of women in labor, Frigga ensured fertility and was also the goddess called upon to bring a woman love and marriage. She was also called upon by those who were dying to ease their transition into the afterlife.

​The Norse goddess Frigga is a goddess who keeps us in touch with our intuitive nature and helps us make transitions and new beginnings. ​And as a goddess of love and divination, Frigga helps keep our lives in alignment with our spiritual selves.

Frigga was the goddess of love, marriage, and destiny that also ruled over the moon, sun, clouds, and sky in general. Her symbols are associated with these things, so let’s take a closer look at some of them:

The spinning wheel and the spindle are common symbols of Frigga because she used a spindle and spinning wheel to weave the destinies of all humans and gods, including herself.

Her other symbols are the full moon, fine jewelry, the sky, the weather, and the New Year.

Cats have always had strong symbolic and spiritual meanings, and people even believed that cats could predict your future. They also symbolize love, family, elegance, home, and everything that Frigga represents.

Other animal symbols of Frigga are pigs, falcons, and cuckoos.

The mistletoe plant played an unfortunate role in killing Frigga’s son Baldur. Since then, this plant has born white berries that represent Frigga’s tears of mourning. Eventually, Frigga forgave the mistletoe and made it a symbol of love and hope, and established a tradition of kissing under the mistletoe.

Since one of the main Frigga’s symbols is full mun, a moonstone is a perfect gem to represent this goddess. Other gems and precious metals that symbolize Frigga are amber, silver, rose quartz, pink tourmaline, emerald, and gold.

Silver is the color of the moon and, by association, Frigga’s color. The other two colors that are great at symbolizing Frigga are white and green. Some shades of blue can also be used to represent this goddess.