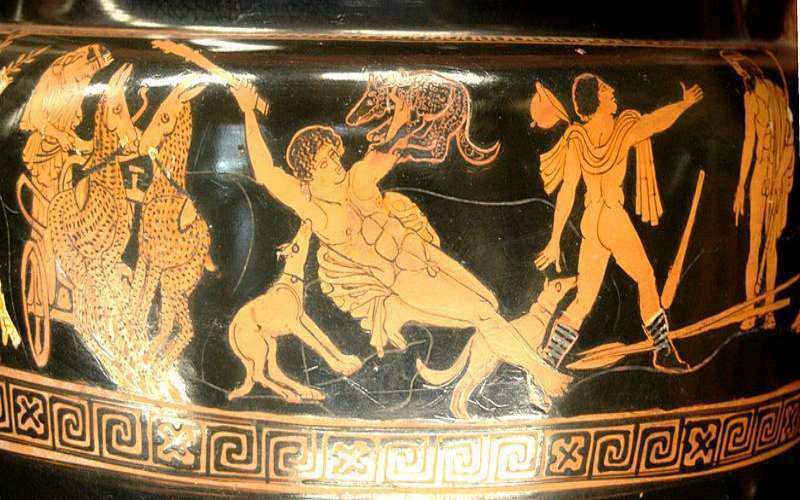 In Greek mythology, Artemis (also known as the Roman goddess Diana) was the daughter of Zeus, the mighty ruler of the Olympian gods. Her mother, Leto, gave birth to Artemis after a short and painless labor.

However, Leto’s labor continued, with her contractions growing weak and painful. Moved to compassion, the infant goddess Artemis, born only a few minutes earlier, became her mother’s midwife and delivered her twin brother Apollo.

You could say that, of all the Greek goddesses, she was literally born to serve as a nurturer and protector!

​Artemis was frequently called upon to nurture her needy and somewhat ineffectual mother. She often felt compelled to come to her rescue even though she received little from her mother in return.

As a result of her having caused her mother no pain in childbirth and her successful role as midwife in her brother’s birth, she naturally became the patron saint of childbirth, the protector of children, and the goddess who especially heard the appeals of women.

​The goddess Artemis was always responsive to the needs of the vulnerable and the suffering. She was quick to defend the powerless from unjust treatment at the hands of the Olympian patriarchy; it is not surprising that in current times she is seen as the “feminist” goddess.

​Even as a small child, Artemis was decisive. When Zeus asked Artemis what presents she wanted for her third birthday, she responded without hesitation that she wanted six things:

​Zeus was amused by her precociousness and happily granted the little goddess her wishes. Even at this tender age, it was clear that Artemis would be the most independent of the goddesses, one who thrived on challenges!

​Artemis’ association with the natural world and the wilderness symbolizes her own untamed spirit. The most independent of the goddesses, she roamed the forests in her role as a huntress.

​The Greek goddess Artemis was famous for her hunting skills, the sharp focus of her attention, and her unerring aim. She was known as a fearless and responsible hunter, willing and able to bring down the most terrifying beasts.

She was especially fierce in her protection of the gentle animals that were usually preyed upon. As the protector of animals and the young, the goddess Artemis was angered because a group of Greek sailors had slaughtered a hare and its young. She delayed them from sailing to join the Battle of Troy.

The Relationship With Mankind

​Artemis was not the least interested in cultivating the land or in harnessing the forces of nature to benefit mankind (she left those responsibilities to Demeter and Athena, respectfully). She could easily be described as an early environmentalist.

​Artemis seemed to be more comfortable with the companionship of women friends. Often depicted by artists while hunting or bathing with her band of nymphs, the goddess valued her freedom and personal space and protected them with ferociousness.

​Indeed, those who restricted her freedom, those who tried to thwart her commitment to reaching her goals, or simply invaded her privacy, paid dearly. When the hunter Actaeon accidentally came upon Artemis while she was bathing, she turned him into a stag, whereupon his own hunting dogs attacked and tore him to pieces.

The Relationship With Other Deities

​Artemis could be both vengeful and impulsive. When she discovered that Callisto, one of the nymphs in her band of companions, had violated her vows of chastity and become pregnant as a result of an affair with Zeus, Artemis changed her into a bear without a moment’s hesitation. Had Zeus not intervened to place her in the stars as the constellation Callisto (The Bear), the young nymph would have died quickly as the victim of a hunt.

​With the exception of her brother Apollo, who was a frequent ally and companion, Artemis was not known to have had very satisfying relationships with men. Her one great love affair, with the handsome and respected mortal Orion, ended very badly.

​Upset that his sister’s time and attention had been diverted away from him, the jealous Apollo tricked Artemis into killing Orion. Knowing that Orion was swimming in the ocean, Apollo bet Artemis that she could not hit “that distant object on the horizon” with an arrow.

​Filled with confidence in her skills as an archer, she accepted the challenge. Successful as always, Artemis discovered that her competitiveness and unerring aim had killed the only man she had ever loved.

​In her abject grief, she turned her dead lover into stars and shot him into the night sky, where he remains as the constellation Orion. Never again did she allow herself to become vulnerable to romantic love.

The Goddess Of Moon And Light

​The Greek goddess Artemis was often associated with the moon, especially the crescent or “new” moon. Phoebe was one of the many names she was called. The name Phoebe means the “light one” or “bright one.”

​As the “Goddess of Light,” she had the divine duty of illuminating the darkness. She was often depicted carrying a candle or torch, lighting the way for others, and leading them through uncharted territories.

​In Greek mythology, Artemis, despite her refusal to conform to conventional ways or tradition and her fierce independence, was depicted as one of the compassionate, healing goddesses. Of all the Greek goddesses, she was the most self-sufficient. She lived life on her own terms, and was comfortable both in solitude and in holding the reins of leadership.

​Above all else Artemis gives us courage. Like her counterpart, the Roman goddess Diana, she illuminates those places that terrify us. Lending us her strength to bring us safely through our fears.

Artemis, also known as the Roman goddess Diana, is often represented by the new moon and symbols associated with her fierce, adventurous, yet distinctly feminine nature.

It is hardly surprising that many of our icons representing feminine strength and the passionate embrace of causes are derived from the ancient goddess symbols of Artemis.

The crescent moon (new moon) is one of Artemis’ symbols, as she was not only the goddess of hunting but also the goddess of light and moon. Her other name was “Phoebe,” which means “the light one.”

Artemis’ other symbols include a bow and arrow, sandals, clouds, three pillars, and a blue sky.

Dogs have been used for hunting since they were first tamed. It makes no wonder that these animals symbolize Artemis as a goddess of hunting.

Anemones symbolize losing a loved one in a tragedy, and unfortunately, such was the case with Artemis. She was in love with Orion, a mortal man that was accidentally killed by her.

Jasmine’s scent symbolizes modesty and purity, traits that are associated with Artemis. This scent also symbolizes love and passion, something Artemis wasn’t known for. Still, she loved once, with all her heart and passion, but it ended tragically.

Other perfumes and scents symbolizing Artemis are aloes, ginseng, lemon verbena, and camphor.

Moonstone is the most common gem symbol of Artemis, as she was the goddess of the moon and light. Other gems and metals that can symbolize Artemis are pearl, quartz, crystal, silver, turquoise, iron, aluminum, and diamond.

Silver is the color often associated with moon, and by association, with Artemis. Her other colors are white, red, green, and turquoise.

If you want to honor and strengthen your Goddess Type, or you want to recognize your missing Goddes Type, try these meditations to invoke Artemis: